Big Bang Over The Western General 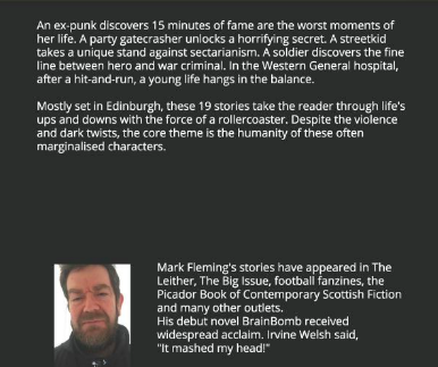 This anthology contains 19 short stories, mostly set in Edinburgh. Diverse characters include a teenager failing a deadly gang initiation, a nurse who is friendly with a corpse, a father who goes berserk while retrieving his daughter's lost toy, a couple who fall out over a murdered pet, and two brothers conscripted during the Wars of the Roses, who discover true horror on the field of Towton, an appalling battle that will claim 1% of the total population of England.

Excerpt from the anthology: Dragons

This exhilarating compilation is available to buy on Amazon. 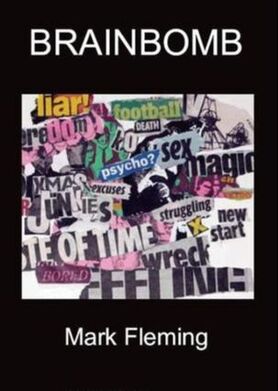 Brainbomb was a ferocious joyride through the highs and lows of mental illness, experienced by a young Scotsman, Neil Armstrong. The story commenced at his lowest point when he was locked-up in a psychiatric hospital. The chapters then unfolded in a series of lurid flashbacks: as a teenager at Clash gigs, as a drunken night-clubbing philanderer and as a Stone Roses devotee. The original version of this semi-autobiographical novel was published in 2009 to considerable acclaim. It has since been withdrawn from publication.

I am currently re-drafting Brainbomb for re-release later this year.

"The dialogue is frequently amusing, embarrassing and yet strangely poignant, lending the book an authenticity that makes the reader feel he is living through the violent late '70s/80s or the grey oppression of the Thatcherite years. In short, this is a great book if you are interested in depression, in need of a laugh, or keen to relive your youth via the experiences of another".
Bobby Smith, author of One Love Two Colours and The Armageddon Pact