i gawk at the TV, at the tory conference from blackpool. norman tebbit starts addressing the faithful. Except he's talking directly to me. 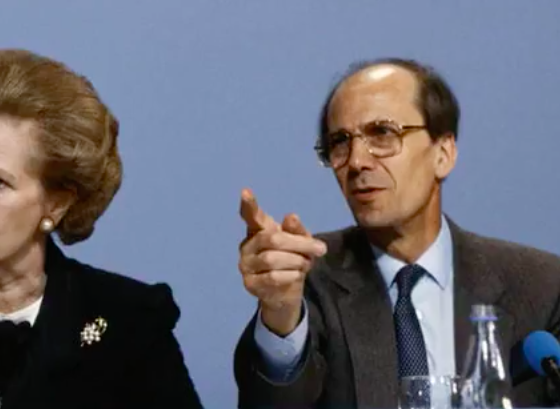 Tebbit stares into the camera. I flinch. Although he’s referring to an Autocue, I know the score. He’s talking to me. Blaming me. I feel his accusations boring into me. ​

When he states the only thing restraining the economy is the prevalence of shirkers and scroungers, it’s not for the benefit of his middle-aged, Middle English congregation. It’s for me. He’s talking to me. Blaming me. I feel his accusations boring into me. Everything grinds to a halt while I become his sole focus. Any moment now he’s going to mention my name.
​
Glancing out the window I notice two bricks on the walls of the house opposite, sooty in colour. They aren’t normal bricks. During Tebbit’s tirade they’ve been activated. They’re actually stereo speakers. As the Tory Chairman rails against me, his sunken eyes following me as I squirm, these twin amplifiers are channelling his diatribe across the back greens. Over the surrounding streets. I march into the kitchen where Mum is rinsing dishes.

‘I’m going to hand myself in’.

‘I’m going to hand myself in. To the police. Today’.

‘The police?’ She positions a bowl in the dish rack.

‘What are you on about now?’

‘Well, what are you supposed to have done?’

‘Mum. I know I’m being watched. And it’s not just the stereo speakers.’

‘What are you babbling about, Mark?’

Although she’s maintaining a lucid tone, had I been capable of thinking straight I would’ve recognised the despair she was fighting to mask.

‘I’m not… babbling. It’s true. When I was in the bath yesterday, I could hear someone up on the roof. They were inserting bugging devices. Or a camera.’

Mum shuts her eyes. Sighs. Finally mustering a smile, she says: ‘Mark. There are people who can help. I was going to tell you once you’d had a shower, freshened up. Woken up a bit. We’ve made another appointment with Dr McCabe.’

‘I saw the Burberry scarf… Hanging from his door… He’s a soccer thug.’

‘What? Mark… You’re just not yourself? Can’t you see it?’

‘Dr McCabe isn’t Dr McCabe? Norman Tebbit talks to you through the TV? This all sounds like an episode of Dr Who.’ Lighter-hearted. ‘Why don’t you try writing something, like you used to? Science fiction?’

‘Yes. You’ve got a great imagination… for stories.’

‘You mean… You think I’m round the twist?’

​‘Of course I don’t think you’re round the twist, Mark,’ she replies. She’s grateful for the excuse to about turn and switch off the tap.
‘I’m not going. No way. You can’t force me.’

I hear Dad’s clumsy approach from their bedroom. His back pain is acute. After having spent the past few days confined to bed, eating meals from trays, peeing into a bottle, he’s heard me bleating. So he’s struggled out of his resting place to shuffle into the hall on his knees. Now he is glaring up at me like an irate Toulouse-Lautrec impersonator.

‘Don’t be ridiculous, son. Why are you being like this? You need to see the doctor. It’s for your own good. Please. You’re making your mother’s life a misery at the moment.’

​Bunching my right fist I fleetingly entertain the sickening impulse to spark him out. But like so many other poisonous notions flitting through my mind, the thought has scarcely materialised before it evaporates.
‘The doctor’s here, Mark.’

‘What do you mean, the doctor’s here?’

‘Since you refused to make an appointment, I phoned to request a house call. It’s for your own good.’
Entering the front room to discover Dr McCabe sitting by the TV, briefcase by his side, a folder spread over his lap, seems like yet another bizarre twist in my unraveling life.

‘Mark. Hello there. How are you? Please have a seat. Your mother’s a little worried about you, that’s all, so she asked if I’d pop round. I was making house calls nearby, it’s no problem. How are you?’

After glaring into the carpet, I engage him reluctantly. ‘What… What are you going… to write… in your notes?’ It seems to take an inordinate amount of time to say this. It seems as if the rest of the world is at 45rpm but I’m stuck at 33rpm. It even feels as if I’m blinking lethargically. But I’m not tired. My mind is unspooling.

Rifling through the papers seems to be a way of filling the silence. ‘By the way, the results, of your blood test, they came back negative. That should brighten your mood?’

‘At your last appointment, you were concerned you might have contracted the HIV virus. Well you can rest assured, you haven’t.’

I misinterpret his affable tone as sarcasm. Meaning he’s lying. He’s just saying this so Mum won’t worry about me; or worry what the neighbours might be saying about me.

He looks over to Mum. This is the first time I’ve realised she’s sitting in on the consultation.

‘I tell you what, Mark. Why don’t you go and make us a pot of tea? I’ll have a quick chat with your mum.’

I’m reluctant to leave them alone together. Exiting, I close the door, press my ear to it. McCabe says, ‘I just want to recommend what’s best for Mark.’ I know what he really means. He wants to recommend what’s worst for me. He’ll be taking orders directly from Tebbit.
Proudly powered by Weebly