these 3 TRACKS, by wolf alice, the mysterines and x-ray spex, are BURSTING WITH ATTITUDE, CRUNCHING GUITARS, SOARING MELODIES AND SELF-BELIEF. SEPARATED BY DECADES, THEY ALL SOUND CURRENT, DEMANDing TO BE HEARD.​ 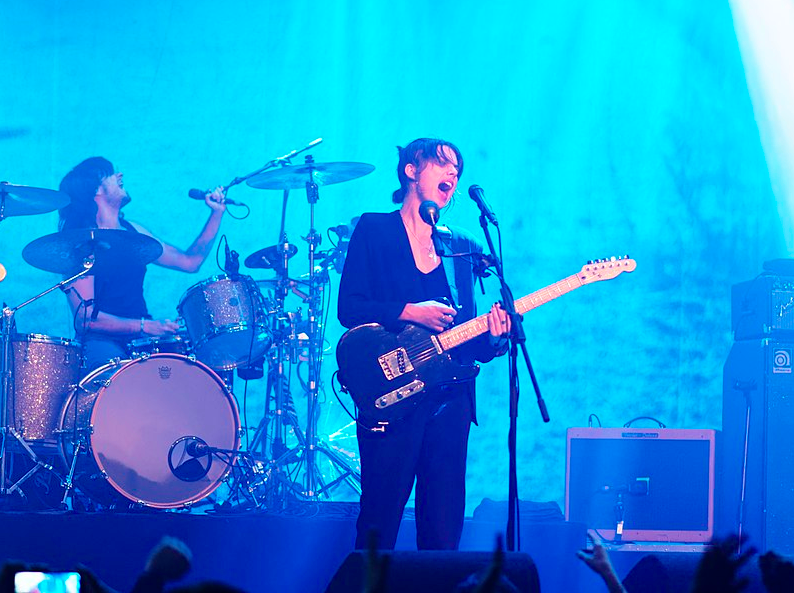 Unbelievably, a quarter of a century has passed since Britpop and the Oasis v Blur battle to reach no.1, a heady era when Noel Gallagher schmoozed with Tony Blair in 10 Downing Street and declared Oasis “the last great, traditional rock n’ roll band.” Wolf Alice are one of so many 21st-century bands who make a mockery of the hyperbole.

At the height of ‘Cool Britannia,’ Danny Boyle transformed Edinburgh novelist Irvine Welsh’s cult novel Trainspotting into the hit movie, scooping almost £50 million at the box office worldwide. The soundtrack featured Britpop stars of the day – Blur, Pulp, Elastica – but Oasis were conspicuous by their absence. Boyle had been desperate to include them but was snubbed by Gallagher who had assumed Trainspotting was about spotting trains. Fast-forward to 2017, a worthy sequel T2: Trainspotting was released. Aside from the exhilarating movie, what is most striking is its soundtrack. Instead of dated Britpop we have Young Fathers, High Contrast, The Rubberbandits, Fat White Family. And the glorious Wolf Alice.

Silk, from their debut album My Love is Cool, was used in the trailers, and was so apt for the film's poignant story of reconciliation and loss. Ellie Rowsell sings of "my loving kills me slowly." She was inspired by Californian-born socialite Edie Sedgwick, a muse of Andy Warhol, who was plagued by mental health and addiction issues, dying of a barbiturate overdose aged  28. "I had read Edie Sedgwick's biography and I was kind of inspired by her personality, or at least what I had read of it, and I wrote about the tragedy of that."

Their 7th single Space and Time was taken from their 2018 Mercury award-winning 2nd album Visions of a Life. Rowsell described the feeling behind the sweeping anthem. “Sometimes when I feel a bit low/weirdo I try to imagine my future self looking back on my past self and it kind of makes me feel better. So it’s a song about that really.”

The late Amy Winehouse, one of the most gifted singers of her generation, could apply her beautful contralto voice to many genres, effortlessly switching from jazz to soul to rhythm n’ blues. When she provided the vocals to a Mark Ronson cover of Valerie by The Zutons, she added indie rock to her many strings. There are distinct echoes of that fusion in the fresh and invigorating sound of The Mysterines, also from Liverpool.

The ferocious riffs churned out by Lia Metcalfe, George Favager and Zak McDonnell might be following a well-worn path, but their own meld of psych, blues and grunge is elevated by Metcalfe’s mesmerising vocals, conjuring PJ Harvey’s fearless attitude but with a richer, contralato sound (not a million miles away from Amy Winehouse.)

Championed by Steve Lamacq, 'Love's Not Enough' has received regular airplay on BBC Radio 6 Live, and no wonder. This full-throttle indie anthem features one of the catchiest choruses you'll hear in 2020.

The b-side of their debut single, the magnificently impudent 'Oh Bondage, Up Yours,' this track stars singer/songwriter Poly Styrene, a true pioneer of the 1970s punk movement.

Her band was formed after she placed adverts in the NME and Melody Maker in the summer of 1976, recruiting kindred teenage spirits under the banner YOUNG PUNX WHO WANT TO STICK IT TOGETHER. She was joined by BP (Big Paul) Hurding on drums, 15-year-old sax player Laura Logic, bassist Paul Dean, the son of a Polish refugee who had fled the Nazis, and Jak Airport a friend of the then glam rock band Japan, who swiftly jettisoned mid-70s stack heels and make-up for the spikes and straightlegs of punk. Jak's flying-V guitar was named Candy Darling. (Candy was the transsexual icon and star of two Andy Warhol films, muse of The Velvet Underground, and featured in verse two of 'Walk on the Wild Side' by Lou Reed).

After six rehearsals in their manager's front room they made their live debut at London's renowned punk venue, The Roxy. They were chaotic, but their originality and self-belief were evident.

Always the antithesis of the testosterone-driven rock n'roll exploding all over the pub and club circuit of 1977, personified by biker jackets, aggression, spitting and audience-bating, Poly revelled in  thrift-shop cardigans, lurid plastic jewellery, and signature dental braces. Her lyrics were more cerebral than a simple 'fuck the system,' her obsession with dayglo imagery subverting consumer society. From the outset, Poly confronted the gender stereotypes that persisted in rock, presaging the Riot Grrrl movement by 15 years. In this punk classic, still biting after 40 years, Poly's shrill delivery elevates the humdrum to art: "Huri yama yama, huri yama yama, boring boredom, boring boredom!"

Sadly, in 2011 Poly passed away, far too young, at 53: The World Loses some of its Dayglo
Proudly powered by Weebly