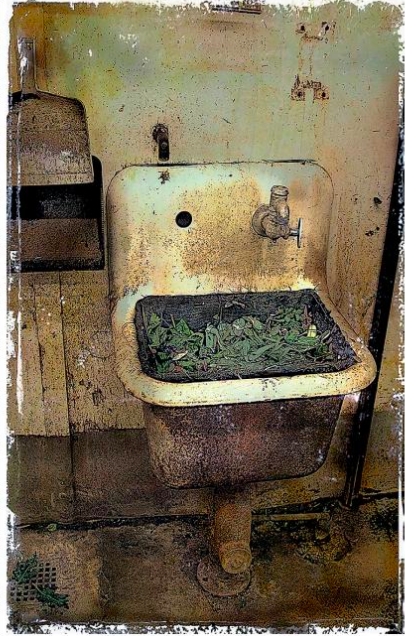 i came across a childhood diary from 1976 and flicked through it. a chance meeting LATER THAT DAY reminded me of a darker side to the same year

The other day I came across a diary from 1976. There were many gripes: school dinners, having to wear a brace, the enthusiasm of certain teachers for dispensing the belt. There were more upbeat scribblings: Kenny Dalglish’s winner securing a 2-1 victory over England at Hampden (not quite alleviating the 5-1 Wembley disaster the year before.) Being too young for pubs, I spent much of my leisure time watching TV: Colditz, The Water Margin, It Ain’t Half Hot Mum, It’s A Knockout, The Goodies, Jim’ll Fix It.

Life has an uncanny ability to throw coincidences at you, because 1976 had also come flooding back to me a few weekends previously. Driving through Gorgie with my wife and daughter, I’d stopped at the traffic lights outside McDonald’s. Innocuously pushing a wheelchair through the Saturday crowds was a man I recognised immediately. Although four decades had passed since our last encounter, his face was imprinted in my subconscious, indelible as a drunken holiday tattoo.

He had been a volunteer at a Cairns Memorial Church Sunday school picnic I’d been dragged to by a churchier schoolmate, aged 13. This had taken place in the grounds of Carberry Tower in East Lothian. At one point that afternoon, I’d agreed to accompany this man to fill kettles from a sink in an outhouse. He was tall and intimidating; eccentric looking, his slicked-back hair a throwback to National Service days. After securing the door, he subjected me to an ordeal of groping and fumbling. In real time, it was over in minutes. But in my mind, the universe ground to a halt.  As I tried to ignore his feverish breathing, I was petrified: for a fleeting moment, I feared this was all a precursor to being murdered.

You were warned never to put yourself in a position where you'd be along with Igor. We even had a signature tune for him, based on the charming terracing ditty, 'You're gonna get your fucking heads kicked in!' Igor leave my fucking balls alone! 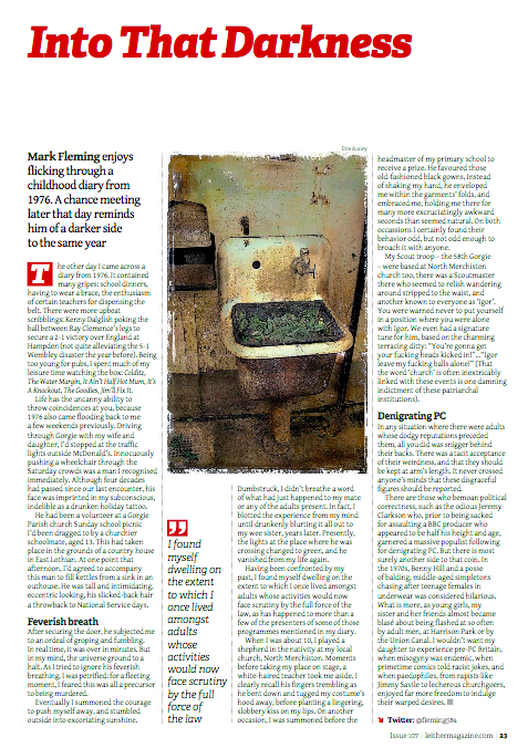 Eventually I summoned the courage to push myself away, and stumbled outside into excoriating sunshine. Dumbstruck, I didn’t breathe a word of what had just happened to my pal, let alone any of the adults present. In fact, I blotted the experience from my mind until drunkenly blurting it all out to my wee sister, years later.  The lights changed to green, and he vanished from my life again.

After being confronted by my past, I found myself dwelling on the extent to which I once lived amongst adults whose activities would now face scrutiny by the full force of the law, as has happened to more than a few of the presenters of some of those programmes mentioned in my diary.

When I was about 10, I played a shepherd in the nativity at my local church, North Merchiston. Moments before taking my place on stage, a white-haired teacher took me aside. I clearly recall his fingers trembling as he bent down and tugged my costume’s hood away, before planting a lingering, slobbery kiss on my lips. On another occasion, I was summoned before the headmaster of my primary school to receive a prize. He favoured those old-fashioned black gowns. Instead of shaking my hand, he enveloped me within the garments’ folds, and embraced me, holding me there for many more excruciatingly awkward seconds than seemed natural.  Both times I certainly thought their behavior odd, but not odd enough to broach with anyone.

My Scout troop, the 58th Gorgie, were based in North Merchiston church. There was one scoutmaster who seemed to relish wandering around stripped to the waist, and another known to everyone as ‘Igor’. You were warned never to put yourself in a position where you were alone with Igor. We even had a signature tune for him, based on the charming terracing ditty, "You're gonna get your fucking heads kicked in!" “Igor leave my fucking balls alone!” (That the word ‘church’ is often inextricably linked with these events is one damning indictment of these patriarchal institutions.)

In any situation where there were adults whose dodgy reputations preceded them, all you did was snigger behind their backs. There was a tacit acceptance of their weirdness, and that they should be kept at arm’s length. It never crossed anyone’s minds that these disgraceful figures should be reported.

There are those who bemoan political correctness, such as the odious Jeremy Clarkson. Prior to being sacked for assaulting a BBC producer who appeared to be half his height and age, he garnered a massive populist following for denigrating PC. But there is most surely another side to that coin. In the 1970s, Benny Hill and a posse of balding, middle-aged simpletons chasing after teenage females in underwear were considered hilarious. But as young girls, my sister and her friends almost became blasé after being flashed at by adult men so often, at Harrison Park, or by the Union Canal. I wouldn’t want my daughter to experience pre-PC Britain, when misogyny was endemic, when primetime comics told racist jokes, and when paedophiles, from rapists like Jimmy Saville down to lecherous churchgoers, enjoyed far more freedom to indulge their warped desires. 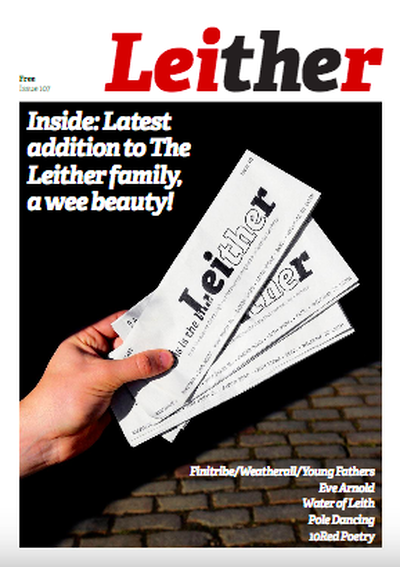 This incident is described in more disturbing detail in my biography, BrainBomb, in a chapter entitled 'The Helper.' Decades later I summoned the courage to make a police statement about the assault. Given the considerable time lapse and lack of evidence, the perpetrator remains undiscovered. But he attended Cairns Memorial Church in Gorgie in 1976.
Proudly powered by Weebly