TOP 5 SONGS THAT INFLUENCED MY CHILDHOOD AND ADOLESCENT MUSICAL TASTES

after hearing the eclectic stuff my parents listened to, my own tastes didn’t really gel into anything coherent until, like so many kids up and down the land, I became hooked on Top of The Pops.

Like everyone else, as I’ve grown older my musical tastes have grown with me, changing, evolving, sometimes gazing backwards through the rose-tinted lens of nostalgia, but always seeking new horizons. The quest to find fresh and innovative sounds is the most exciting aspect, and for this I have to thank BBC Radio 6 Music and my Deezer subscription.

One of my earliest musical memories was hearing The Beatles’ ‘Yellow Submarine’ on the radio, a number one hit in 1966. The Merseybeat combo were never that big in our house. By that time my parents were both over 30, too old to be part of that 'Swinging Sixties' generation who bought hit singles and watched Ready Steady Go and Top of the Pops. Instead, they’d mostly be listening to Radio 2, or LPs played on a ‘gramophone’ that still had 78 rpm as an option.

Mum was big on soundtracks  – South Pacific, West Side Story, Sound of Music  – while Dad listened to everything from Tom Lehrer to Stravinsky’s Rite of Spring, Johnny Cash to Billy Connolly. A particular favourite, especially after a few lagers, would be rousing Irish folk songs. ‘The Mountains of Mourne.’ ‘Galway Bay.’ 'The Wearing of the Green.' 'Danny Boy.' ‘The Enniskillen Dragoons’ even mentioned Monaghan, where he was from. From such an eclectic set of influences, my own tastes didn’t really gel into anything coherent until, like so many kids up and down the land, I became hooked on the chart rundown.

By this time the Fab Four had left cheesy Merseybeat far behind and were the embodiment of the mid-to-late 1960s counterculture, having released increasingly complex albums: Rubber Soul (1965), Revolver (1966), where this single was taken from, and Sergeant Pepper’s Lonely Hearts Club Band (1967). Yellow Submarine’s irreverence and chorus hook featured on anti-Vietnam demos, and the title was rumoured to reference Nembutal (also nicknamed ‘yellow jacket’, which came in yellow capsules and was the drug Marilyn Monroe overdosed on in 1962). But to my four-year-old ears, it was not only catchy, it inspired the earliest surviving example of my childhood artwork. 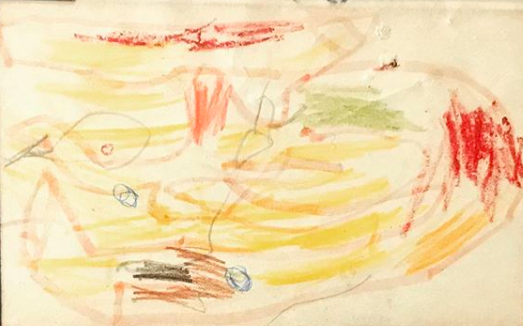 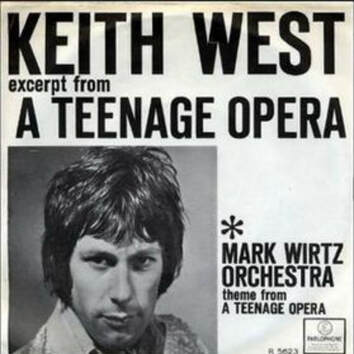 Predictably, John Peel, then a DJ on pirate station Radio Caroline, loved it.

When I was preoccupied with my Matchbox cars or Airfix armies, certain songs playing in the background would chime. ‘Grocer Jack,’ by Keith West reached number two in the charts, just behind Engelbert Humperdincks ‘Last Waltz.’ Although I didn’t appreciate it at the time, ‘Grocer Jack’ was a slice of psychedelic pop, a segment of a longer project, in collaboration with Mark Wirtz, called ‘A Teenage Opera.’ According to Wirtz, this was to be “a kaleidoscope of stories, a bouquet of allegorical, tragiccomic tales about a variety of characters and their fate, all related to each other by the common thread of living in the same imaginary turn-of the-century village. Each character distinguished him/herself by rebelliously pursuing a dream or lifestyle against all odds and in defiance of conformity, their ageless celebration of youth and individuality embodying the very spirit of rock n’roll.”

EMI executives expressed misgivings about the use of a children’s choir on a ‘rock record,’ and were reluctant to commit to the longer project, which was eventually shelved. Predictably, John Peel, then a DJ on pirate station Radio Caroline, loved it.

Roy Wood’s band received their first number one hit in 1973 with this singalong single, following on the heels of the previous week's chart-topper, another Glam Rock classic, The Sweet's ‘Hellraiser.’ I watched them on Top of the Pops for each of its four weeks on the top spot, and would sketch Roy Wood’s multicoloured barnet and Glam warpaint. I used every crayon in the pack.

By this time my wee sister Anne and I were also recording the charts on a portable cassette recorder, our compilations capturing the often-wacky but frequently captivating pop and chart–friendly rock of the early 1970s – Slade, Alice Cooper, Roxy Music, Nazareth, 10 c.c., T-Rex, Suzi Quatro et al. Too young to appreciate David Bowie's masterful albums, we did include his single ‘Jean Genie,’ clueless as to why he was singing about chimney stacks. We also taped quirkier tracks – The Goons ‘Ying Tong Song,’ David Essex’s ‘Rock On.’

Only the third of Queen’s eventual 72 singles, this was the first 7” I ever bought, for 50p, in Edinburgh’s long-gone Sound Centre. The following year ‘Bohemian Rhapsody’ propelled the band into the stratosphere, even although those EMI executives, fingers ever on the pulse, complained it was too long for chart success. It became a massive hit, lodging in pole chart position for nine weeks up to Christmas 1975 and beyond. Footage of their Christmas Eve gig at the Hammersmith Odeon was broadcast on BBC2, sealing my obsession with the band.

I borrowed a stack of albums from an older neighbour, among them Queen II and Sheer Heart Attack. At that time I was devouring science-fiction and fantasy. Isaac Asimov. John Norman. J.R.R. Tolkein. John Wyndham. H.G. Wells. A lot of the imagery in Queen’s lyrics, featuring black queens, white queens and ogre battles, struck a chord.

​From being a pop devotee, I absorbed these long-players, Glam Rock only in so far as the band wore stack heels and nail polish. They mostly played exhilarating hard rock: the opening track on Sheer Heart Attack, ‘Brighton Rock,’ lasting five minutes 11 seconds, was the perfect meld of Brian May’s mesmerising fretwork and Freddie Mercury’s grandiose voice. On the back of listening to these LPs, I bought ‘Seven Seas of Rhye.’ The following weekend ‘Now I’m Here’ became the second single in my collection. 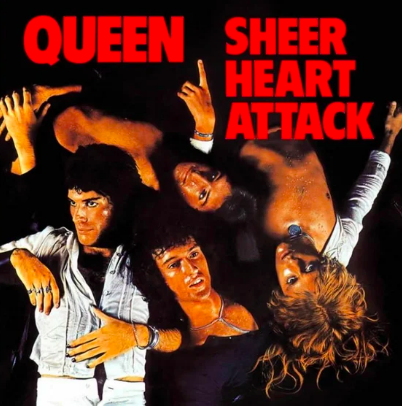 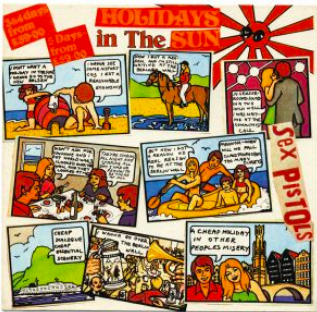 The Pistols had had the audacity to release a single referring to royalists as morons during Queen Elizabeth’s Silver Jubilee year.

By the mid 1970s I was fixated with hard rock and heavy metal, and the newly released Star Wars had reinforced my love of Sci-Fi and escapism as the appropriate backdrop to this music. My bedroom turntable resonated with Led Zeppelin, Deep Purple, Motorhead, Bad Company, Blue Oyster Cult, and others too numerous to mention, but especially Thin Lizzy and Black Sabbath.

Midway through 1977 I began to take notice of a new type of rock band appearing on Top of the Pops, their names invariably preceded by ‘The.’ The Jam, The Stranglers, Eddie and the Hot Rods, The Adverts, (The) Buzzcocks, The Saints. They played their guitars loudly, but their songs never exceeded three minutes, driven by an intensity that made a lot of the older stuff I’d been listening to sound dull. What’s more, the audience always looked nervous when these groups took to the stage with cropped hair and (aside from The Jam) dishevelled clothes, sometimes spray-painted or held together by pins. The onlookers seemed unsure what to make of their vitriolic delivery, perhaps their preconceptions based on the lurid stories the tabloids were printing about punk rockers, especially the Sex Pistols. The latter had had the audacity to release a single referring to royalists as morons during Queen Elizabeth’s Silver Jubilee year.

I was now compiling my cassettes via Radio Forth’s Edinburgh Rock show, and although DJ Jay Crawford’s playlist covered everything from Black Sabbath to Black Oak Arkanas, he did inject the proceedings with the occasional ‘The’ band. I recall adding ‘Anarchy in the UK’ to my extensive back catalogue. A far cry from the ‘Ying Tong Song.’ Around this time my radio dial also started veering towards John Peel's nightly show on BBC Radio 1.

But it was hearing Never Mind The Bollocks, Here’s the Sex Pistols that gave my musical tastes their most seismic jolt. I was on a family holiday to St Abbs in Berwickshire. The first night, struggling to sleep with sunburn, I listened to a house party in full swing over the road. Somebody else had got into punk, because they played the entire album, nothing else, flipping it back over as soon as it was finished. From ‘Holidays in the Sun’ through to ‘EMI.’ From that pounding intro, jackboots marching by the Berlin Wall merging into Paul Cook's drumbeat, to Johnny Rotten's final raspberry to A&M , the second record company to drop them after EMI. (Those on-the-ball EMI executives yet again, sacking the band for a few 'fucks' on live TV. Their debut album went on to sell 1.3 million copies worldwide, and is still regarded as one of the most groundbreaking rock n'roll albums of all time). Track two, ‘Bodies,’ was like nothing else I’d ever heard, an adrenaline rush propelled by Jones' strident three-chord Les Paul riffs and a stream of four-letter lyrics.

The Sex Pistols made what a Sounds journalist memorably described as a ‘big, bad, beautiful noise.’ That sweltering July night, in the space of a few hours, the majority of the records and cassettes in my collection became redundant and were never played again.