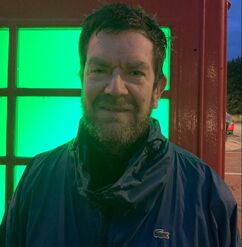 Mark Fleming is from Edinburgh, Scotland. He has been into creative writing since he was a teenager plastered in Wire, Buzzcocks and Chelsea badges (the band). His first attempts to express himself were feverishly scribbling lyrics and cobbling together fanzines while playing in Edinburgh punk band 4 Minute Warning.

His writing evolved into fiction when he discovered James Kelman via an NME book review of the Glasgow writer's short story collection NOT NOT WHILE THE GIRO in 1983. He has had numerous stories published in diverse outlets, including THE BIG ISSUE IN SCOTLAND, football fanzines, THE LEITHER MAGAZINE, laurahird.com, pulp.net, the PICADOR BOOK OF CONTEMPORARY SCOTTISH FICTION, SHORTS: THE MACALLAN/SCOTLAND ON SUNDAY COLLECTION, FRONT AND CENTRE (ISSUE 18), SCOTTISH CHILD MAGAZINE, and 404 INK.

He published a semi-autobiographical novel in 2009, entitled BrainBomb, on a limited print-run. This original book has inspired a memoir, entitled 1976, due for publication in 2022.

A key aspect of Fleming's writing came as a result of his diagnosis with bipolar disorder in the 1980s. After being sectioned under the Mental Health Act in 1987 he spent time in a closed ward in psychiatric hospital. He experienced another breakdown in 1990.  In recovering from these serious episodes he rediscovered his love of creative writing. He became involved with the Scottish Association for Mental Health (SAMH) to promote mental health wellbeing. In collaboration with the Scottish Book Trust he has run creative writing workshops in community groups across Scotland, including homeless individuals and people in recovery from addiction or mental health issues.

He has tutored writing sessions in schools, and was Writer in Residence at Kirkcaldy High School in 2019 where he encountered pupils with infinitely more creative ideas than he ever did aged 13! He has spoken about creative writing and mental health at HMP Saughton and HMP Barlinnie, and was interviewed on prison radio for the latter.
(Gig) The Stranglers, Edinburgh Picture House, 1/3/13
With such an awesome back-catalogue, not to mention recently-penned songs that are up there with anything they’ve released, their biggest headache must be deciding the set list. Read on ->

(Album) Wire, Change Becomes Us, 3/4/13
Luscious pop melds with ambient soundscapes and post-punk outbursts. They have always been masters of catchy song writing. Map Reference contains more hooks in 3 minutes 41 seconds than most bands manage in a career. Read on ->

(Opinion) There is no golden age of rock n roll, 23/8/13
Going back to my own youth, the most exciting aspect of punk was its refusal to stagnate. It was all about encouraging people to make their own statements and experiment musically. Unfortunately self-parody quickly crept in. Read on ->

(Gig) Wire, King Tut's, Glasgow, 27/4/15
Wire came to prominence during the original wave of punk, but even then they were gloriously insular. Consistently interesting and arresting, their most recent releases have been amongst their most satisfying listens. Read on ->

From The Portobello Reporter 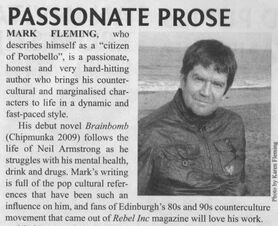